United in Popculture: The USA, Russia, Solidarity, and Queer and Feminist Resistance 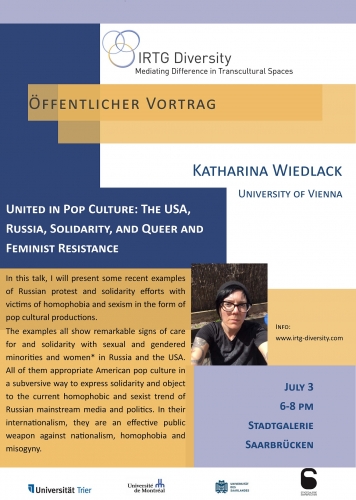 IRTG Diversity visiting scholar Katharina Wiedlack will give a presentation in the context of the exhibition "In the Cut: Der Männliche Körper in der Feministischen Kunst" entitled "United in Pop Culture: The USA, Russia, Solidarity, and Queer and Feminist Resistance".

Abstract: In this talk, I will present some recent examples of Russian protest and solidarity efforts with victims of homophobia and sexism in the form of pop cultural productions. My example vary from the latest Pussy Riot videos in protest against the sexism of US-president Donald Trump to the hundred amateur videos to the track “Satisfaction” (Benny Benassi 2002) in solidarity with fourteen Russian first-year air-transport cadets accused of homosexual propaganda. Although the examples vary in style and professionalism, they all show remarkable signs of care for and solidarity with sexual and gendered minorities and women* in Russia and the USA. All of them appropriate American pop culture in a subversive way to express solidarity and object to the current homophobic and sexist trend of Russian mainstream media and politics. In their internationalism, they are an effective public weapon against nationalism, homophobia and misogyny. Because of their pop cultural format they are not as easily censored as other political protests.
» go back to news index