The IRTG investigates diversity and the mediation of difference in North America and Europe since the 18th century through the lenses of three dominant modes of social action: the politics, the practices and the narratives of diversity. Empirically, these modes of social action are inseparable, of course. But we make an analytical distinction between these three modes in order to explore the conflictual, the quotidian, and the communicative character of the mediation (of difference) as a complex social interaction producing distinct, yet often overlapping localities of diversity as well as transcultural spaces. 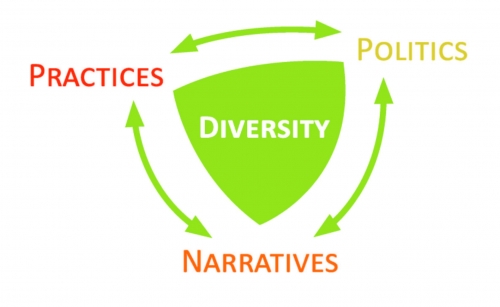 Politics refers to conflictual social interactions that abruptly or gradually establish the preeminence of certain norms at the expense of others and implies processes of inclusion and exclusion, of defining majorities and minorities, and of institutionalizing rights. The research area “Politics of Diversity” focuses on critical events and conflictual processes of spatial appropriation through marginalized social groups, e.g. immigrants, refugees, or Canada's First Nations. The following questions guide our discussions:

While politics refers to social interactions that reconfigure spaces of diversity most visibly in moments of rupture, practices describe interactions that generally reproduce those configurations in a temporality of continuity. By examining day-to-day social interactions this research area seeks to identify how diversity becomes inscribed in the minds and bodies of social agents and in the topography of social milieu. This research area studies practices of diversity with a special emphasis on modes of appropriation of social spaces and on everyday forms of embodiment of symbolic violence by exploring the following questions:

Both informing and arising from politics and practices, narratives refer to a communicative mode of social action producing and reproducing, altering, deconstructing or radicalizing the semantic repertoire and knowledge of a given community. The IRTG examines for example how diversity becomes a topic in different media (agenda setting), how it is described (framing), and on which discursive and ideological patterns the knowledge of diversity is shaped and constructed (gatekeeping). We explore how different forms of stories and modes of storytelling shape social configurations and give rise to localities of transnationalism, and how narratives establish forms of solidarity and identity that enable as well as represent social, cultural, economic, and political relationships. The following questions structure our common research endeavor: