Of 'Contact Zones' and 'Liminal Spaces'. Mapping the Everyday Life of Cultural Translation 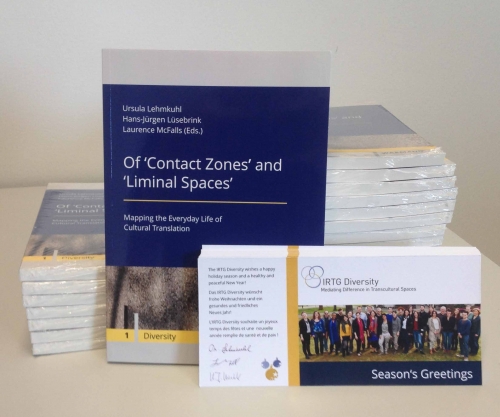 The IRTG Diversity was established in April 2013 and its members have since cooperated in research on cultural and social diversity in Canada, Québec, and Europe. To document this research and to continue our exchanges with the broader academic public, we have now started a new publication series called “Diversity – Diversité – Diversität”.

The first volume of the IRTG Diversity’s publication series, the essay collection Of ‘Contact Zones’ and ‘Liminal Spaces’: Mapping the Everyday Life of Cultural Translation (Lehmkuhl, Lüsebrink, McFalls, eds.) has just been published with Waxmann (Münster / New York). The book is based on the IRTG Diversity’s 2014 lecture series and represents the work of the IRTG Diversity in many ways: The lecture series was an example of true transatlantic scholarly dialogue, with talks being given on either side of the Atlantic, streamed live to Trier, Montréal and Saarbrücken, and discussed in videoconferences. The contributors include renowned scholars from various fields such as sociology, literary studies, geocriticism, and anthropology. The book features essays in the IRTG’s three official languages, English, French, and German. Finally, Of ‘Contact Zones’ and ‘Liminal Spaces’ includes a short introductory text on the IRTG Diversity’s general research agenda and research objectives.

A second volume, Spaces of Difference: Conflicts and Cohabitation, based on the IRTG Diversity’s International Conference in Montréal (2014), was published in early 2016. See http://irtg-diversity.com/index.php?page=now-and-upcoming&article=164.

The publication series also is an opportunity for the IRTG Diversity’s PhD candidates to publish their dissertations, and it is an open series, so suggestions for publications that fit to the IRTG’s research programme are very welcome.

» go back to news index
» top of the page