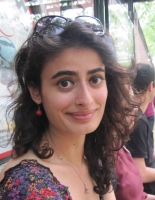 The aim of my study is to understand the dynamics behind migrant’s role in restructuring contemporary cities of Canada and Germany -Montreal and Saarbrücken- in a comparative perspective. The comparative perspective offers to concentrate on the varying relationship between international migrants and the city they have settled in. In this study, migrants are comprised of Turkish migrants who have lived in Canada and German and have opened shopping places, restaurants, cultural centers, and associations that shape and change the urban scalar positioning. As opposed to studies that ignore active roles of migrants in urban scalar positioning, this study takes migrants into the center of the analysis and consider migrants as urban scale makers in contemporary cities. It is interesting to understand what types of identities and dispositions they produce, taking migrants into consideration as urban scale makers.

By using the ethnographic method of in-depth interviewing, the study examines the practices of migrants on socio-spatial relations, and by doing so, it attempts to locate dispositions and competencies which are attributed to the transcultural city. Hence, it traces the impact of the everyday life experience and exposure in the making of transcultural space. Based on migrants’ narratives and practices in their everyday life, this study shows on the one hand, how migrants contribute to making a transcultural city. On the other hand, it shows how migrants become urban scale makers as they experience, understand and evaluate the features of cities. Figuring out data from two cities in Canada and Germany, Montreal and Saarbrücken, this study offers an analytical framework that investigates migrants’ role in urban restructuring.