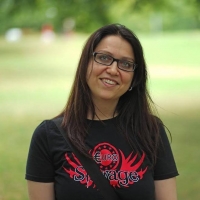 Svetlana Seibel has written her dissertation as a member of the first cohort of the IRTG Diversity’s doctoral students. Her dissertation is situated at the intersection of Indigenous Studies and Popular Culture Studies. Much of her research in general is concerned with aspects of diversity in popular culture, both on the level of representation and participation. As an associate professor of North American Literary and Cultural Studies at Saarland University, she teaches course which reflect these research interests, from Indigenous literatures and media in North America to geek feminism in contemporary television. As an associated postdoctoral fellow of the IRTG who is at the same time an alumna of the IRTG Diversity’s PhD program, she is uniquely positioned as far as providing help, support, and advice for the subsequent groups of IRTG’s doctoral researchers is concerned.

Since 2016
PostDoc Project: "Being and Becoming California: Interrogating California Narratives in Literature and on Screen" (working title)

2016
“Of Vampires, Maps, and Comic Books: Exploring Narrative Sites of Decolonization” (in cooperation with Ashley Morford) – Panel at the CIARS Decolonizing Conference 2016, University of Toronto

Memberships and other relevant Activities

The Society for Multi-Ethnic Studies: Europe and the Americas (MESEA)